35.000 walruses appear in the shore of Alaska. Entire island nations endangered to disappear. Glaciers melting faster every day. Longer and more intense periods of drought and rain.
Is this all related? Or it is just a coincidence? Although there have been several climate changes along the Earth's history, this one is not natural. It is the Climate Change caused by humans, and leading quickly towards a warmer Earth. You might already know the (quite) catastrophic consequences, but do you know how does it work? 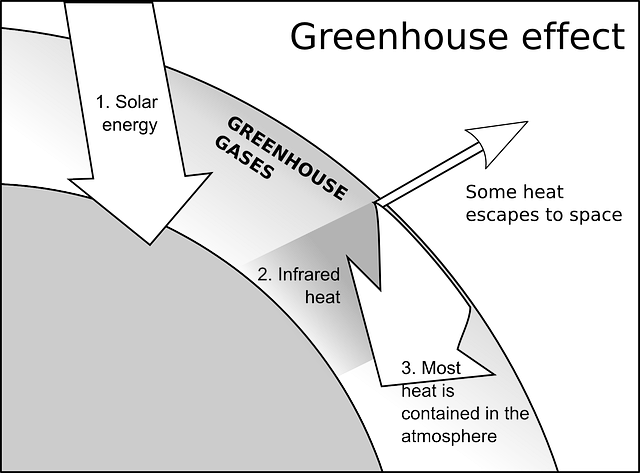 This is the main and most important concept to understand the whole picture. The Greenhouse effect is so important that without it, the Earth would be at -15ºC on average. But instead, we are at about 15ºC. The blue planet works similar to a Greenhouse. It gets warm through sunlight and part of it is kept. Whereas in a Greenhouse are the glass or plastic walls what keep this heat, in the Earth are some gases found in the atmosphere. We are talking about the Greenhouse Gases, such as Carbon Dioxide (CO2), Methane (CO4) or Water Vapour (H2O) among others with less importance.

How we humans are contributing to this?

There is a whole Carbon cycle, where the CO2 is used and reused, keeping the same amount in the atmosphere, therefore without changing the amount of heat the atmosphere keeps. But, we started to add extra CO2 in important quantities. We discovered coal and oil, two fossil fuels that once are burned, they release CO2. It was storage beneath the surface and we release to the atmosphere, increasing its quantity. If CO2 is a Greenhouse Gas, the more we add, the more heat it retains!
Try to imagine the amount of CO2 we artificially added since the 19th century and you'll understand why the global temperature has already increased 0.8ºC.

What should be expect in the future?

Scientist are constantly debating this point, but they agree that it's going to be consequences. The temperature will keep increasing, and the sea level rising. It all depends on how much CO2 we will add, and how much time we are going to spend in shifting to a free carbon society. But we can expect changes in the local weather such as more periods of intense raining or extreme drought. The complete ice melting of the North Pole and its effects to the Polar wildlife. Several species moving towards higher latitudes. People who is forced to move because their land is under water forever.

We have the power to mitigate the effects, but we have to act now.
What do you do for the climate?

Eloi
Naturalist (vocation) and ecologist (education). Mainly birder, with knowledge of Mediterranean plants, starting with insects. Since many years ago I'm fully aware about environmental issues. This blog is a way to share my (humble) knowledge, create debates and expand my horizons.